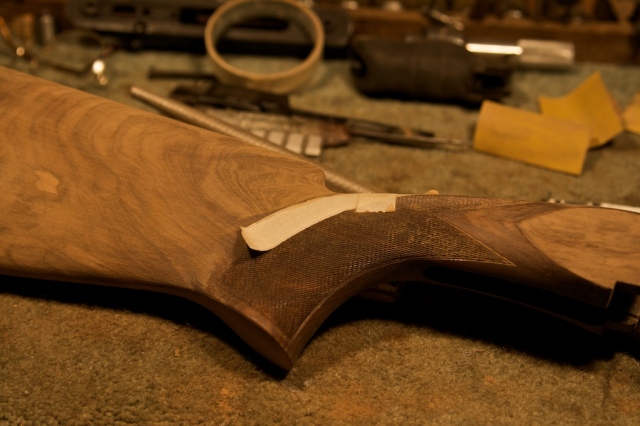 One of the things that I feel is very important when working on restorations is to maintain the look of the original finish and checkering.

Perazzi is a manufacturer of precision shotguns from Brescia, Italy.[1] The company sells hunting and sporting models of shotguns in the over-and-under and side-by-side varieties. The manufacturer is noted for their removable trigger groups, high quality, and high prices (7,500 USD to 440,000 USD). The founder of Perazzi is Daniele Perazzi. The Perazzi family owns and operates the company. The company sells American Trap, American Skeet, Olympic and Doubles Trap, Olympic Skeet, Pigeon and Sporting models.

Perazzi shotguns are widely used by Olympic competitors, including Kim Rhode, who won a gold medal in Atlanta in 1996 and another gold in Athens in 2004.[2] Rhode uses a Perazzi 12-gauge (model MX12) for competition.[3]

This entry was posted in Rifle Building, Rifle Restoration and tagged Woodworking. Bookmark the permalink.